Since tattoos became popular and a matter of a fashion, the amount of them had significantly grown the same as the amount of chest tattoos in particular. Having a body drawing on a chest is an old tradition. Warriors used to prepare for battles with a help of prayers and charms and chest tattoos, in this case, served as a sort of a shield protecting vital organs, heart in particular.

A big drawing or a sophisticated ornament can be placed in this area. And if the artist has enough skills to properly use bulging of the skin surface it is possible to make a real three-dimensional image with realistic volume. The other peculiarity of the placement is the possibility to make symmetrical drawings below the collar bones if you like such designs.

Another advantage of the placement is its painlessness. The tattooing process here is of course not the most pleasant thing in the world, but still, it does not hurt so much as on some other parts of the body. Plus, the chest has much stronger muscles which will not lose their shape with age and time.

This kind of tattoos has a stunning sophistication of drawings plot. Real masterpieces are used as tattoo designs with a lot of details and elements in them. Traditionally, there used to be mainly tattooed on one side of a chest. Nowadays, drawings are placed closer to the collar bone and shoulder, or full chest tattoos.

A very popular tradition of Western tattoos is drawing wings on the chest. Such design symbolizes courage and bravery, it says that its owner plays an important role in the society. Romantic people choose ideas with ships under big wide sails. The man in love can make a portrait of his beloved on his chest.

Women tattoos are remarkable with a bigger variety of designs and ideas, as they can also be places under breasts. This is a very intimate placement, not for everybody to see. Girls prefer bright tattoos, which can be treated as accessories: necklace around a neck, floral garland. A lot of women also love not so big tattoos such as cute bow-ties, swallow bird, little foxy or a simple cross.

Romantic life attitude is an obvious feminine feature, that’s why rose tattoos on chest and other flower designs are also very popular. Heart tattoo also used to be popular for some period of time not so long ago. Now this idea is replaced with other heart-shaped ideas, for example, chained heart with metal wings – the representative of a steam-punk setting.

The drawing often is placed around the nipple, small flowers, hearts or stars. Spider-web ideas are also good as chest tattoos for women. The very common of them is a spider web with a nipple in the center. Girls can also make a tattoo of a bra, which, we think is very weird. And loving mothers ink portraits of their kids, symmetrically if there are two of them.

Chest tattoo is a beautiful and original placement solution, which is always attracting a lot of attention.
Chest is a real canvas for a tattoo artist as it is a rather big area of a human body. The whole painting with an interesting plot can be placed here. And the shape of chest muscles can make the drawing look realistic.

A real advantage of chest tattoos is their painlessness. Of course, it hurts but not so much comparing to other parts of the body where the skin is more thin. Another good side of chest tattoos is the fact that the tattoo on that area won’t lose its shape so fast.
Most men usually make tattoo on one-half of the chest drawing there anything they want. And another part can get the real masterpieces like portraits of beloved, ships with sails full of wind, and awesome wings.

Girl chest tattoos have much bigger variety, as they can make also a tattoo under their breasts. There are a lot of bright drawings resembling some accessories like necklaces or some floral ornament around the neck. However, there are girls, who prefer small tattoos, or example, little pretty swallows, bow-ties or a fox. Another plot popular among girls are chest tattoo ideas with hearts or different kinds of flowers. 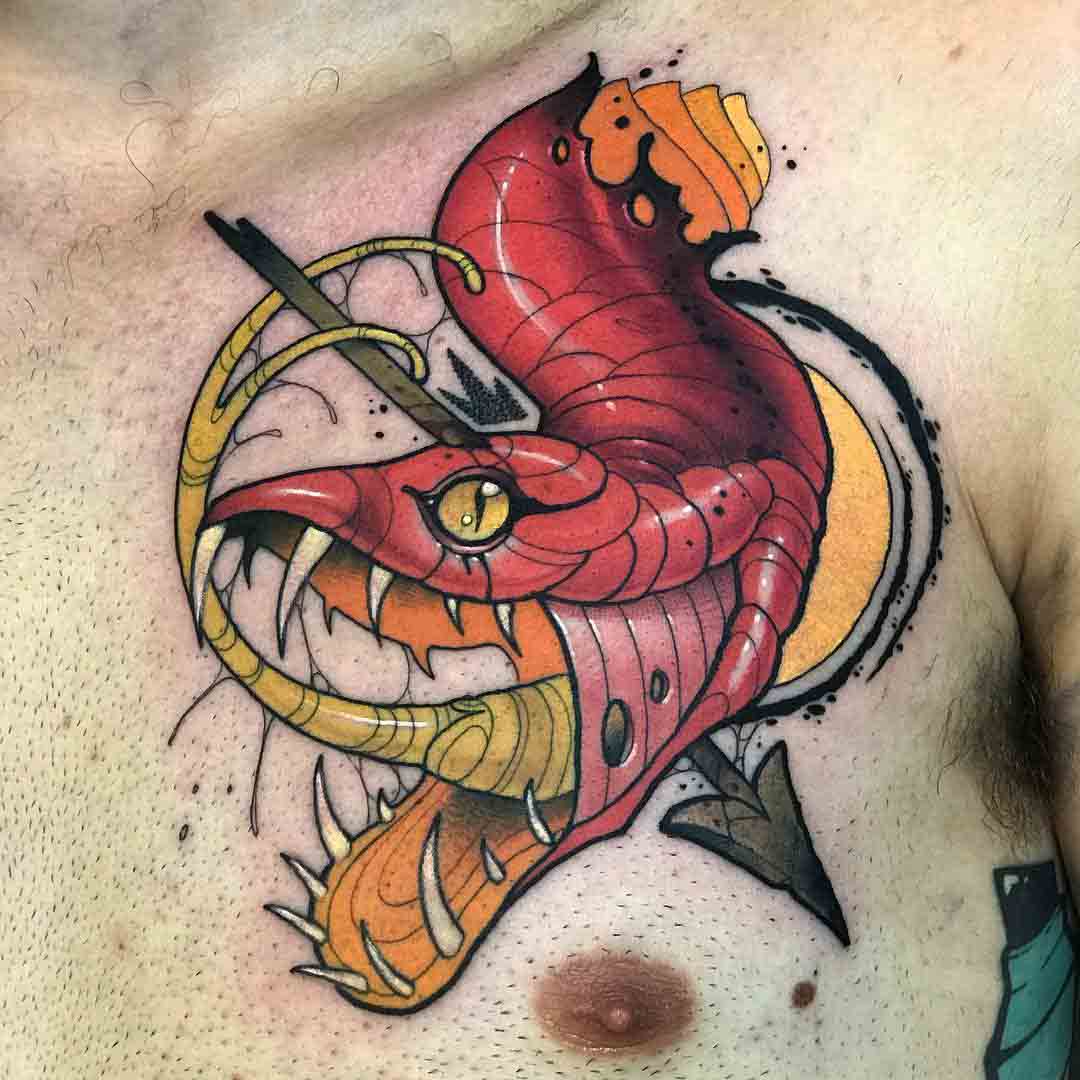 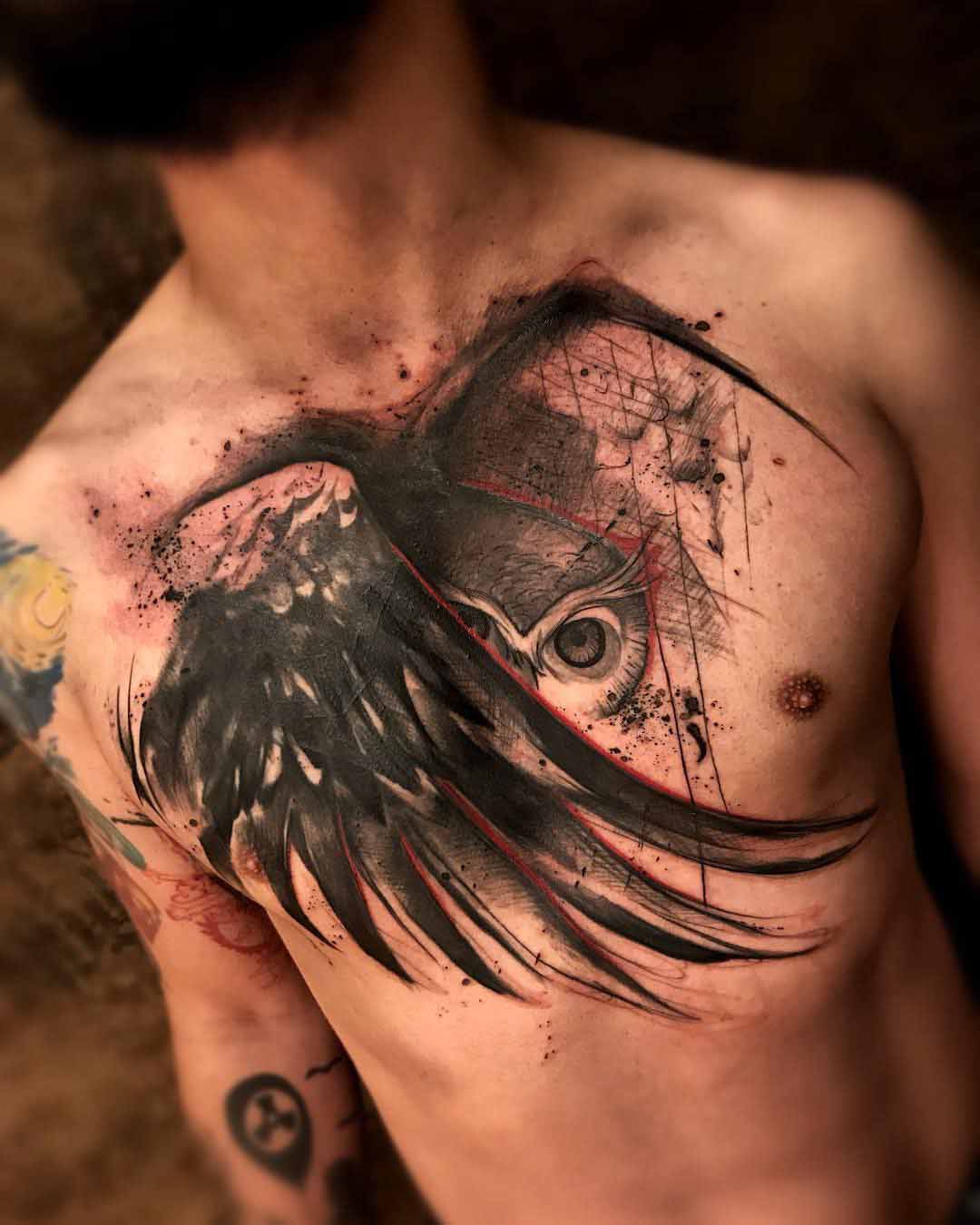 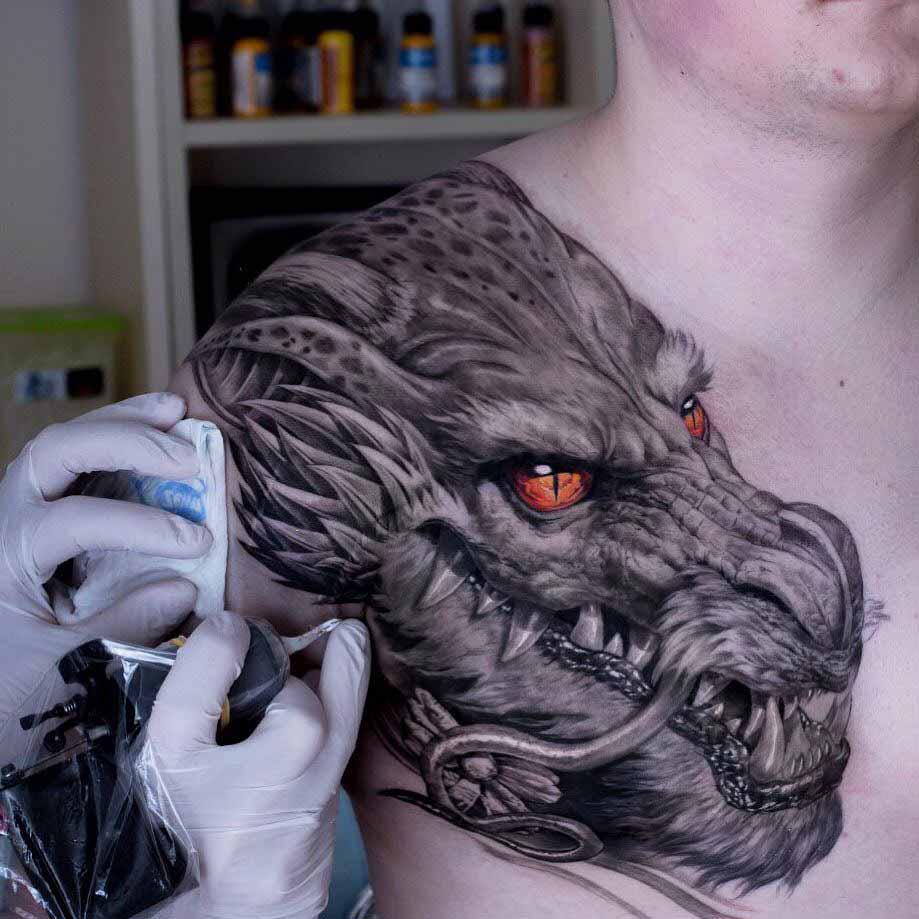 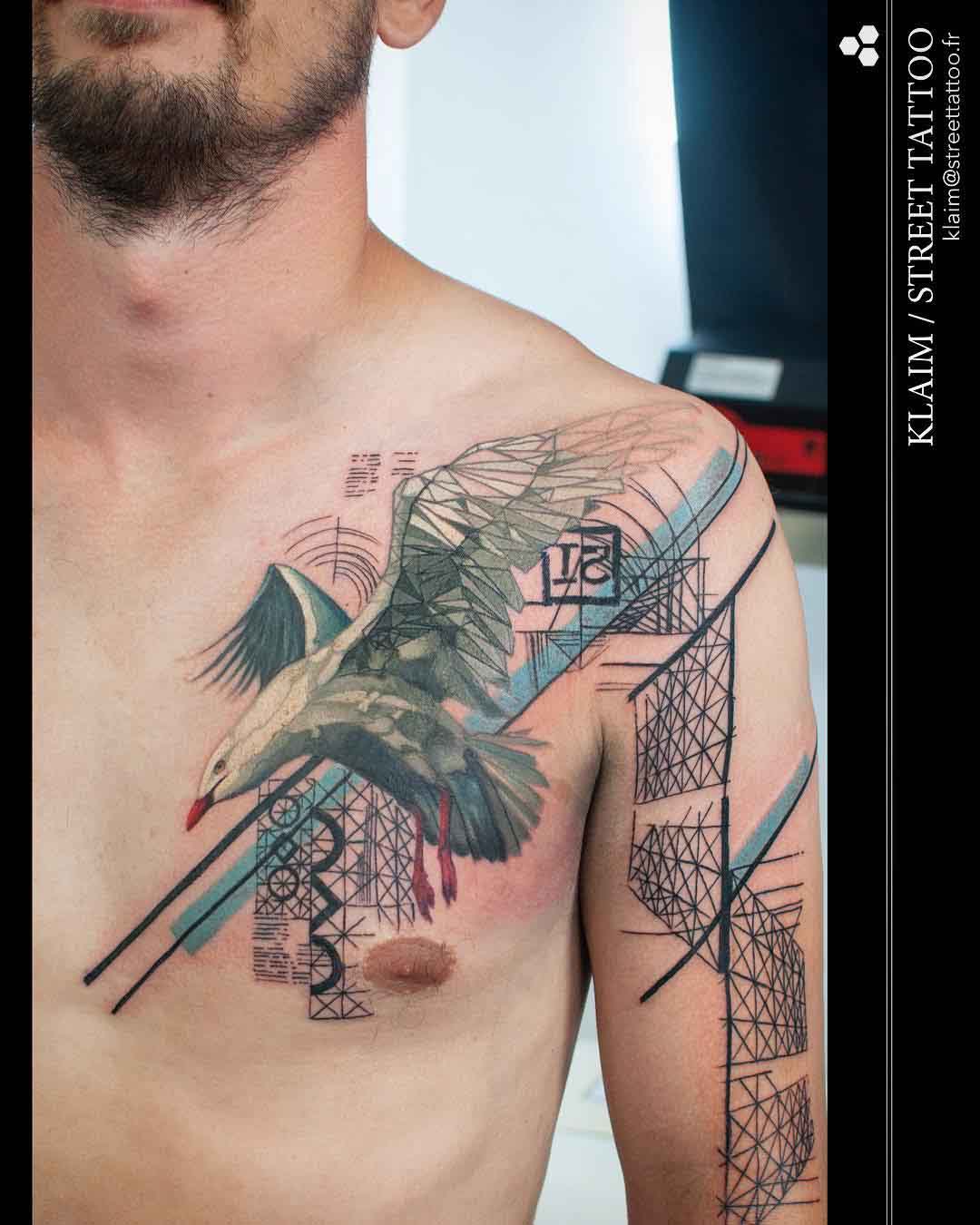 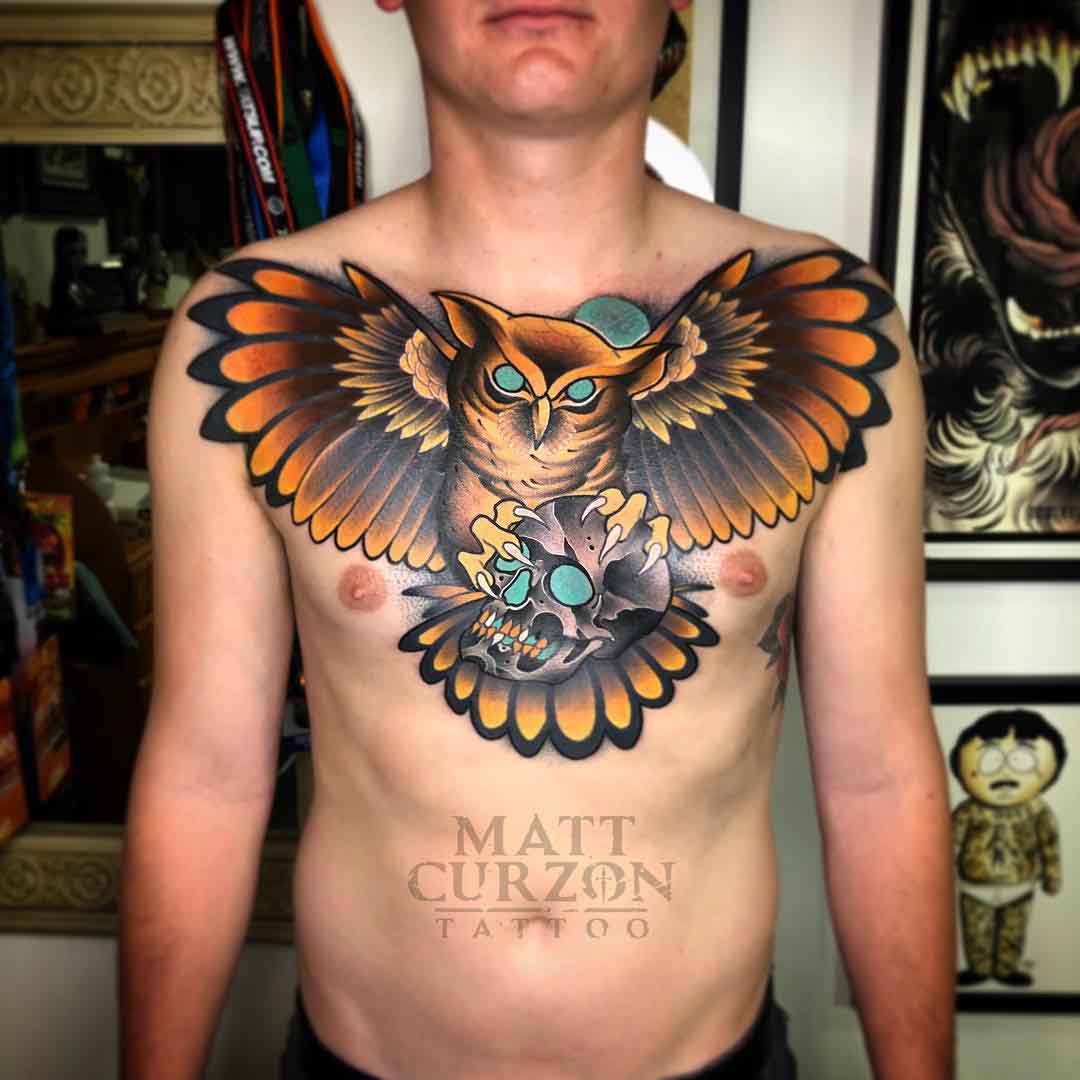 Owl With Skull Tattoo on Chest 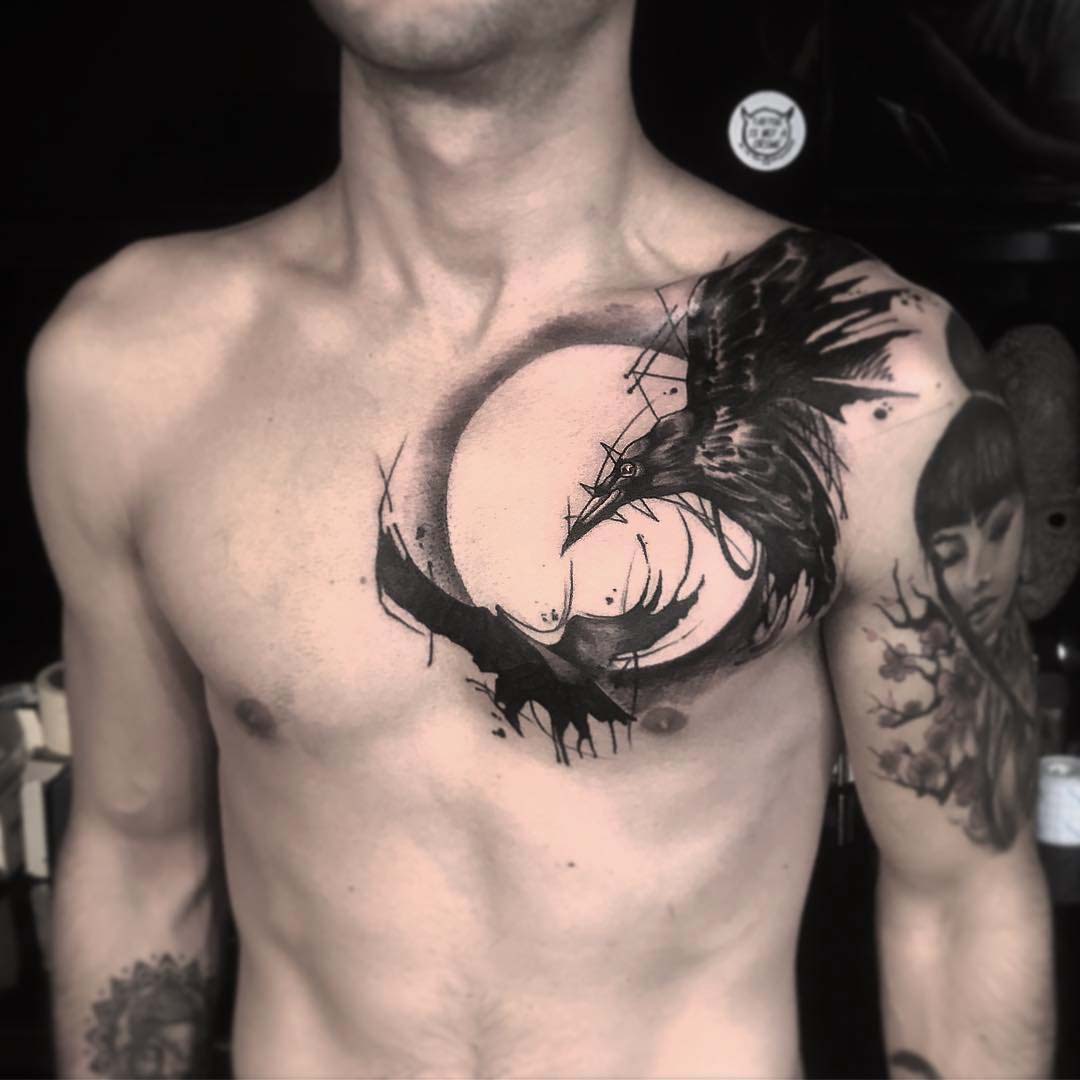 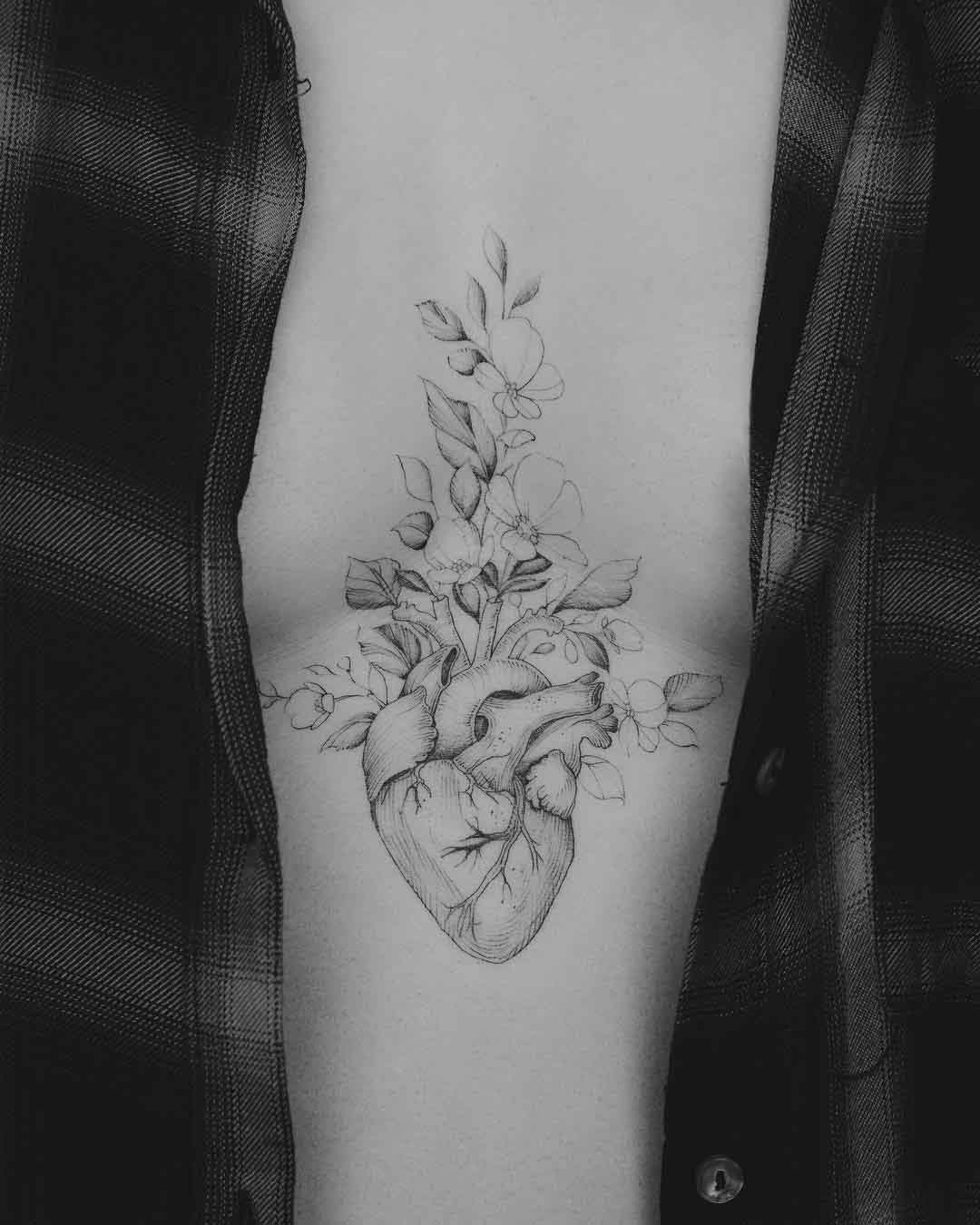 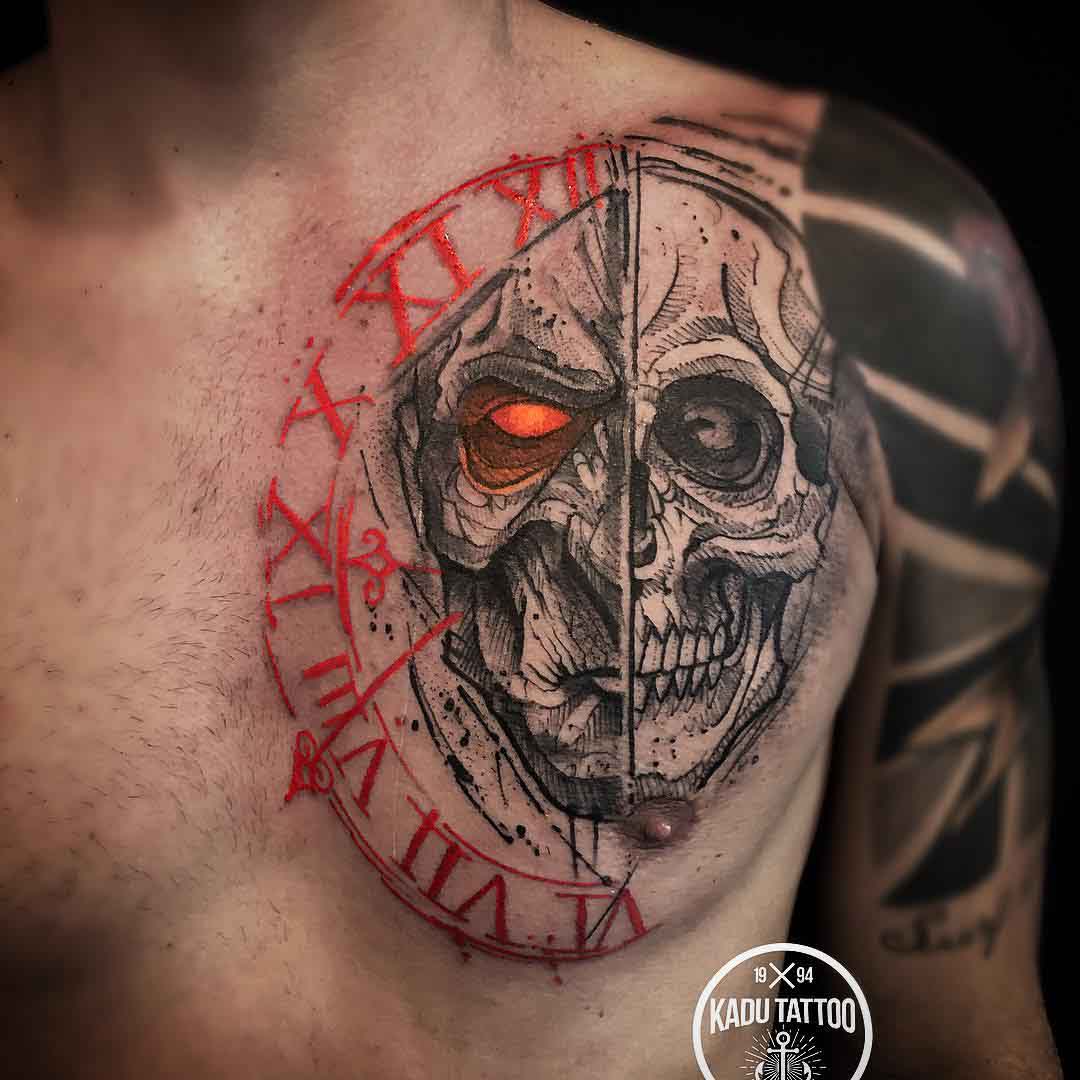 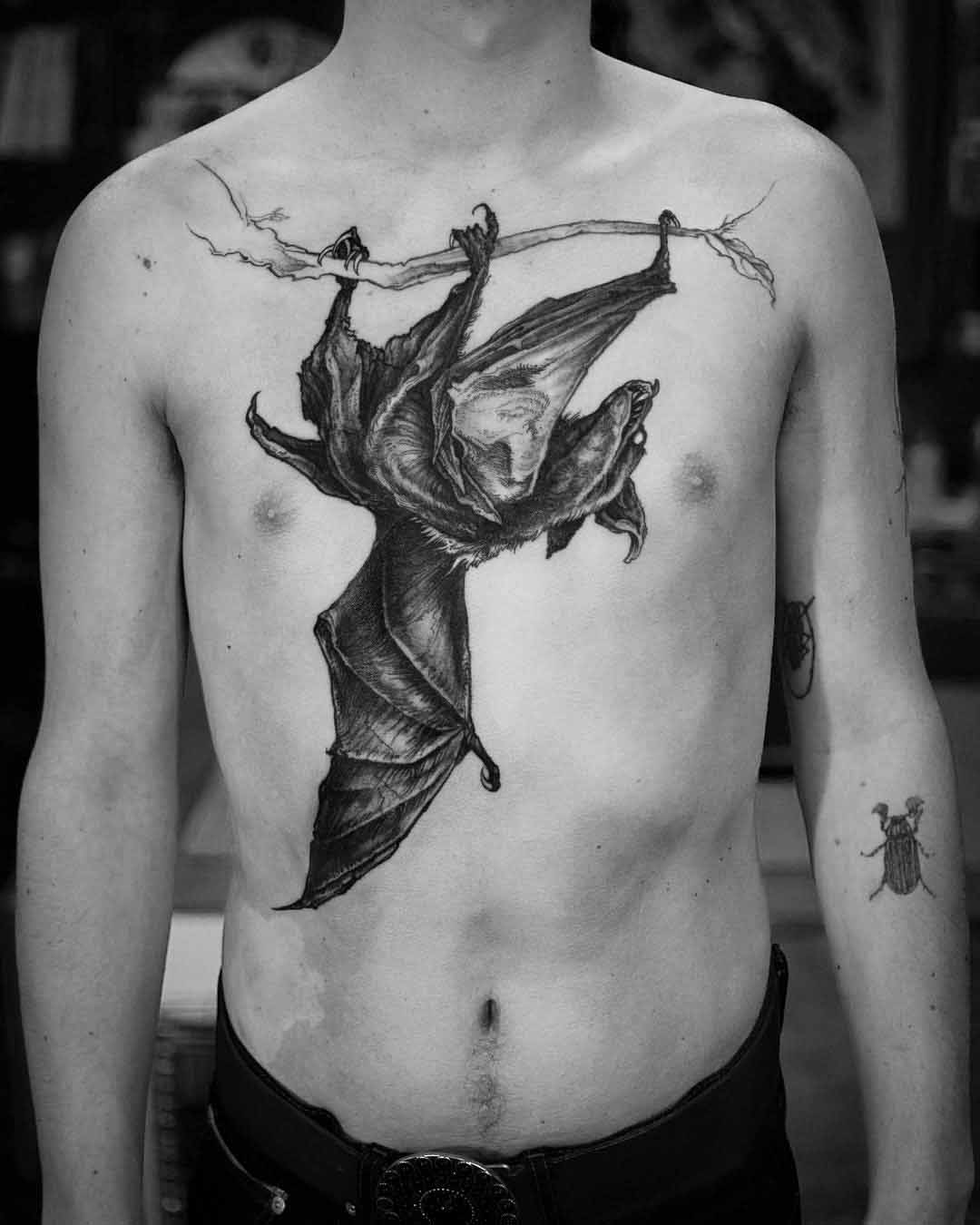 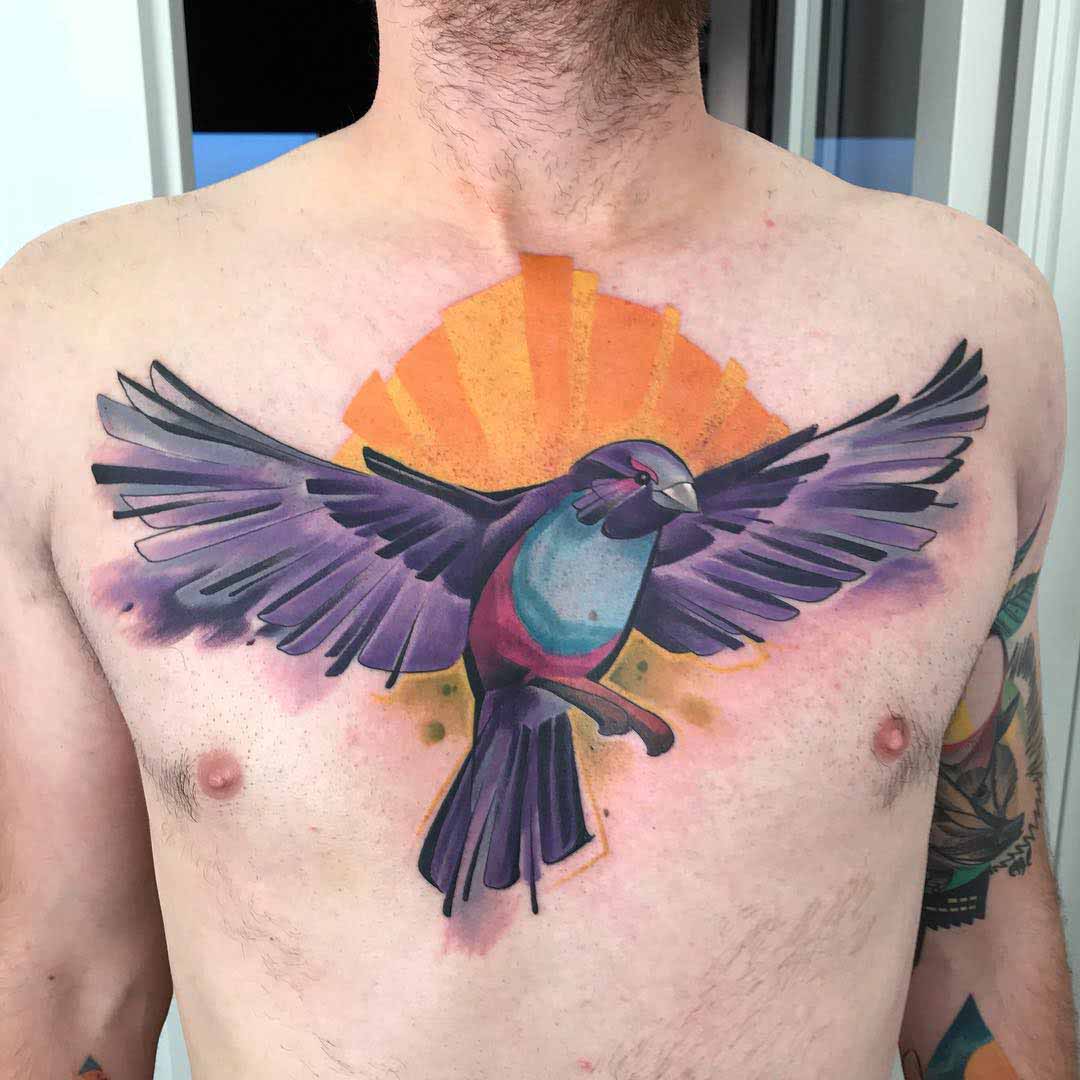 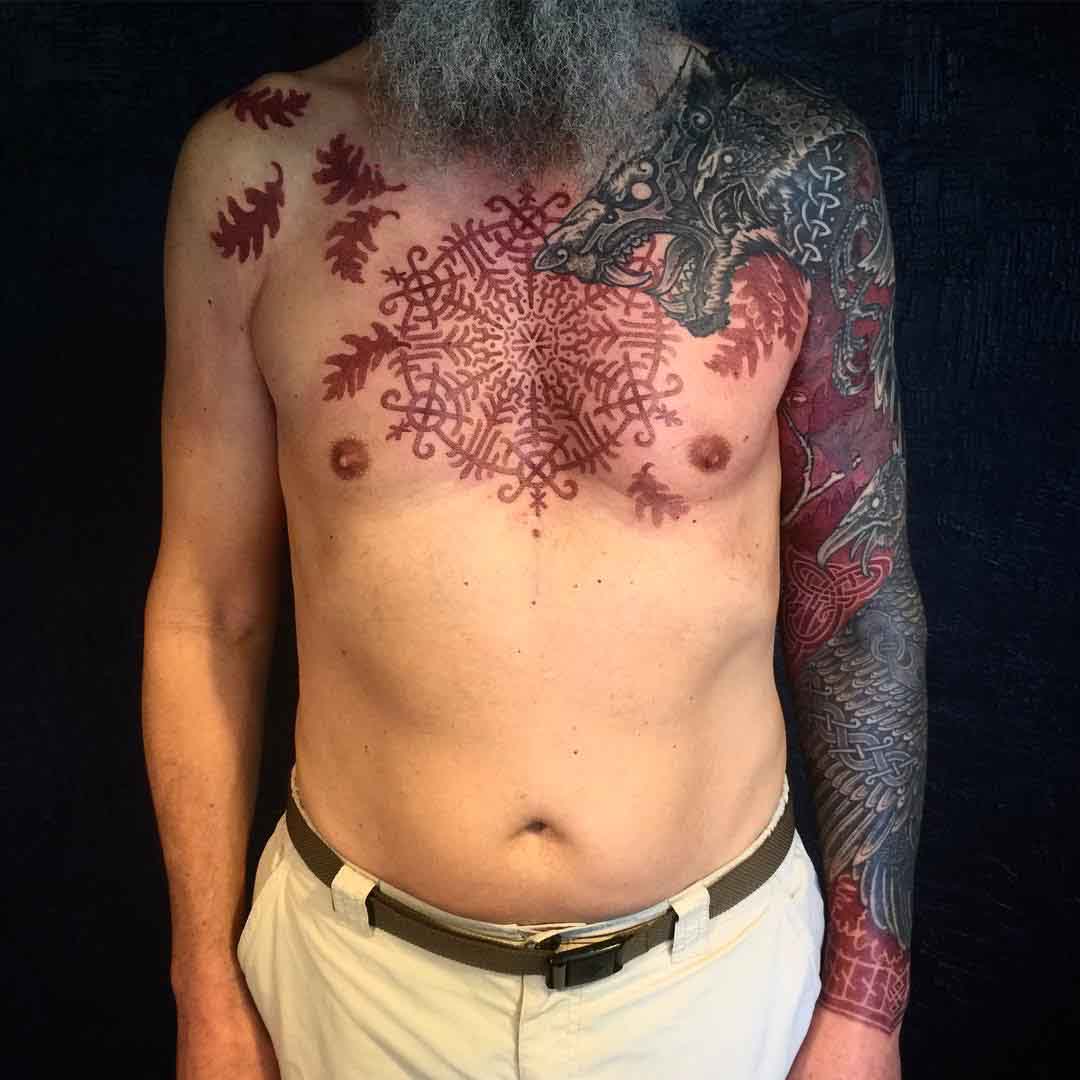 The Mantle of Gangrad Tattoo 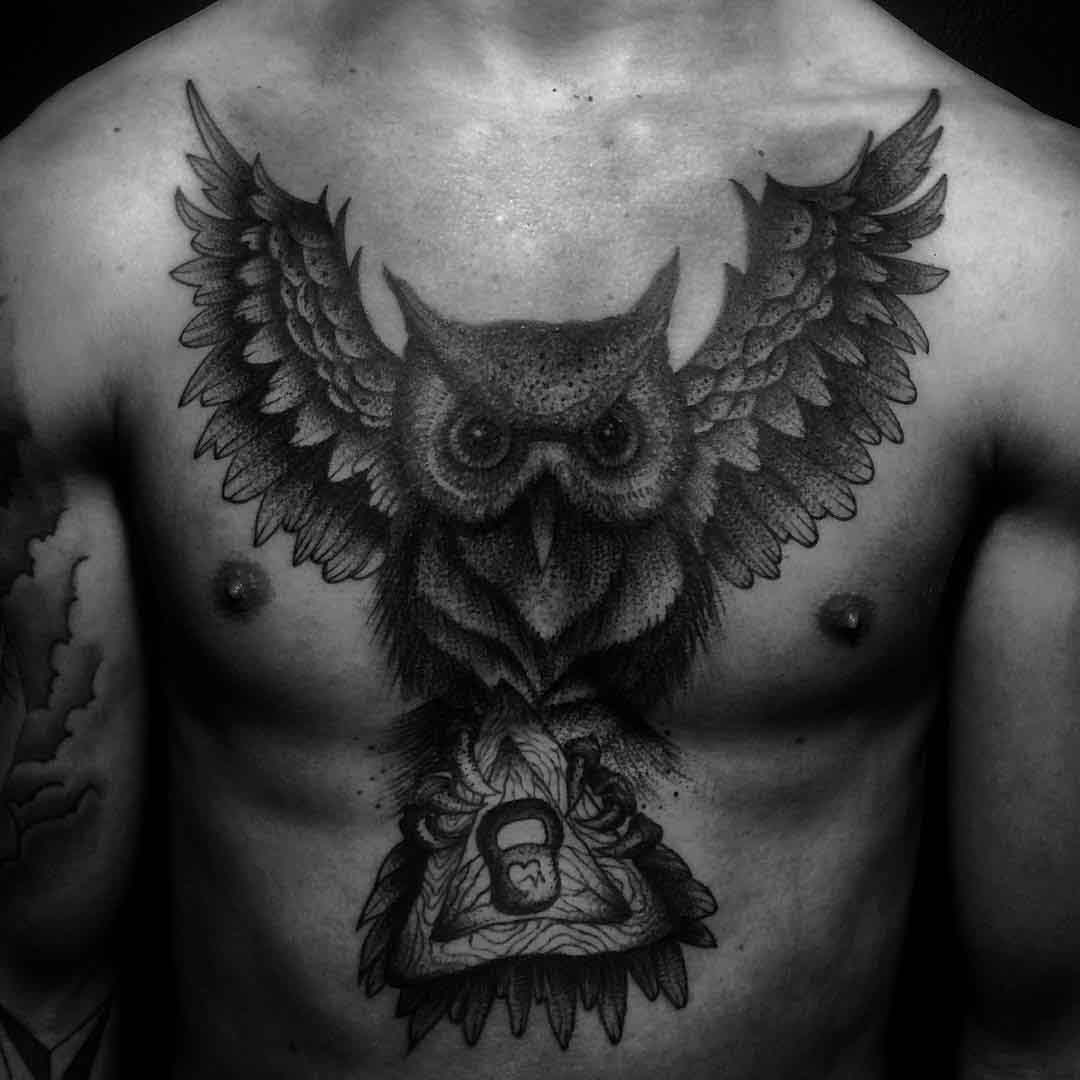 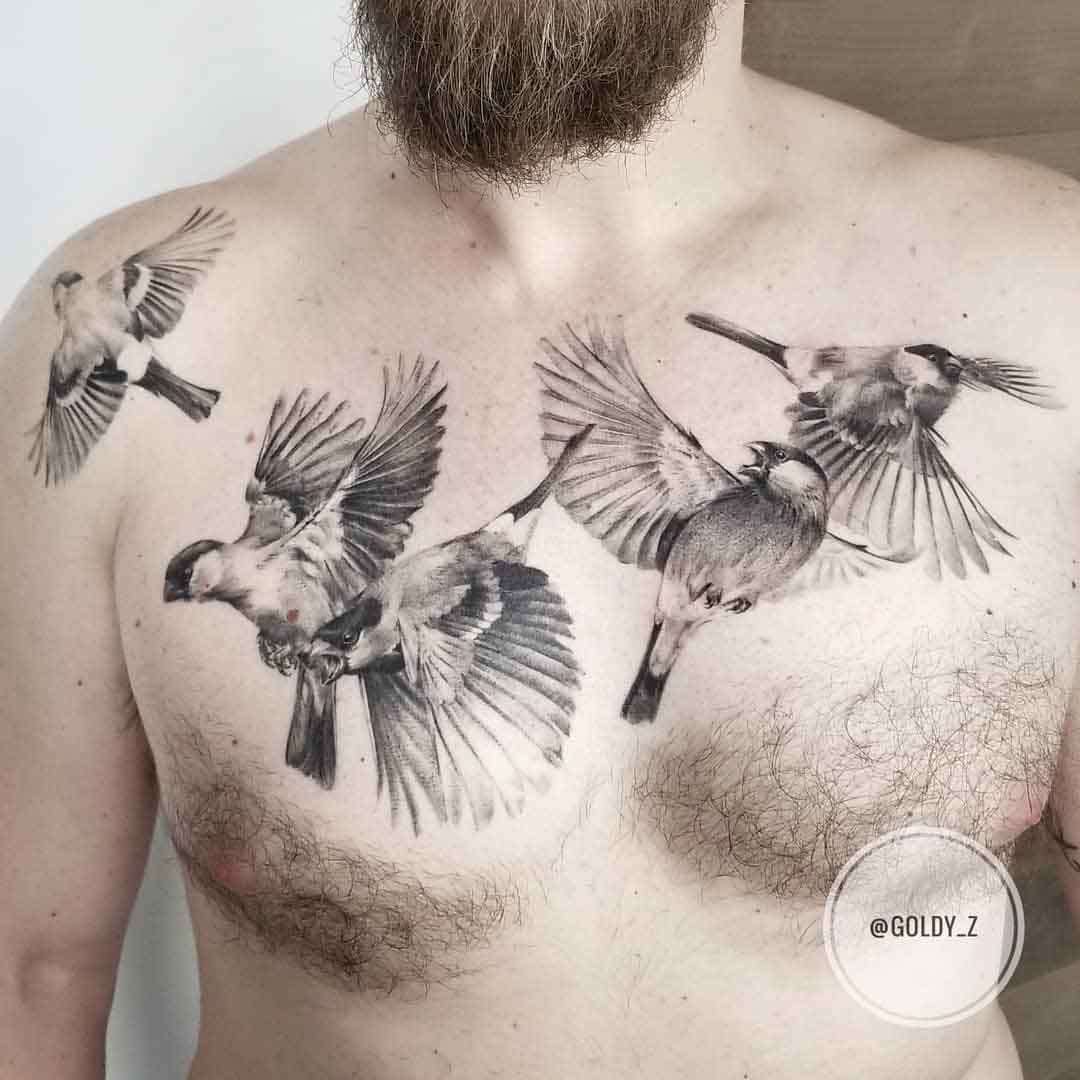 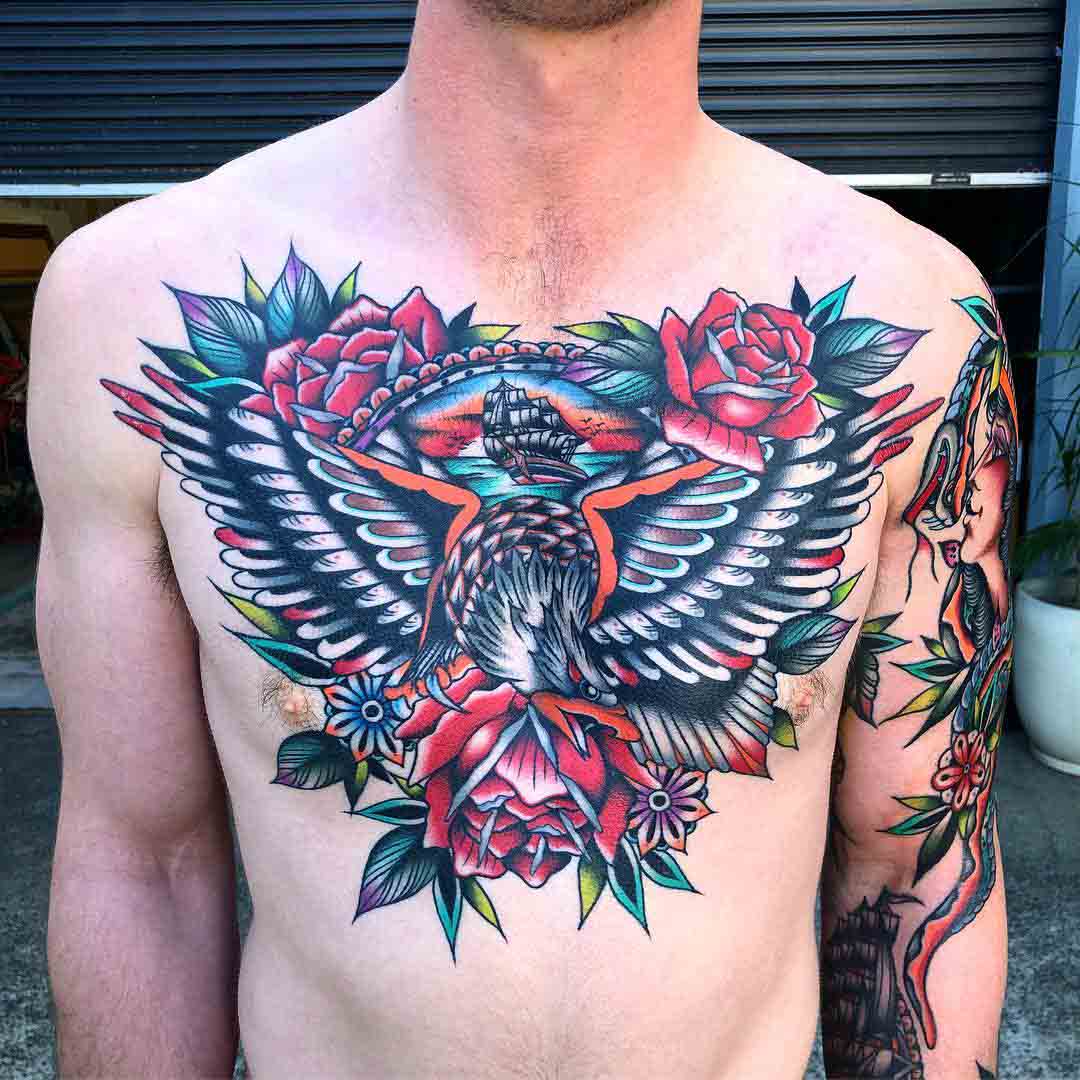 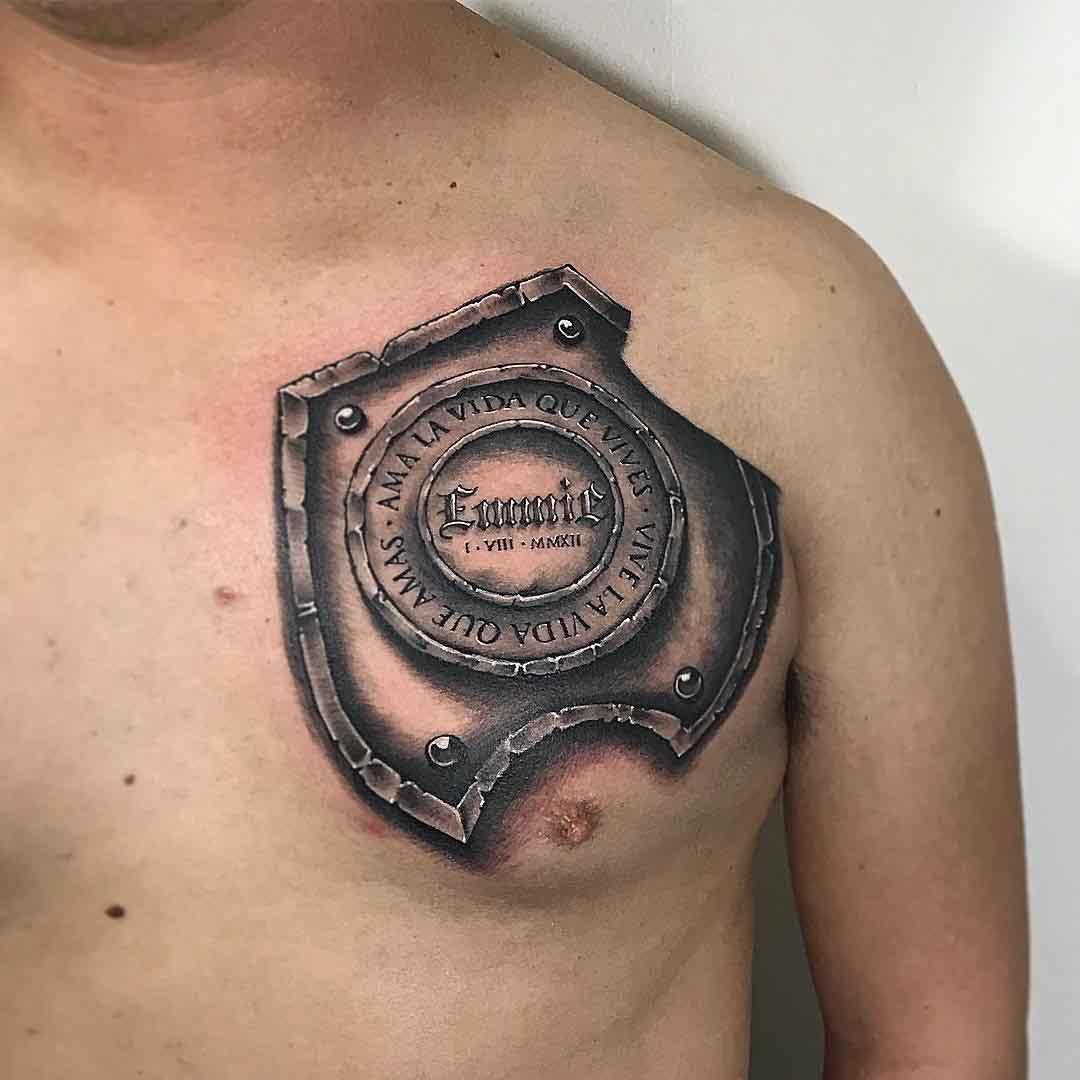 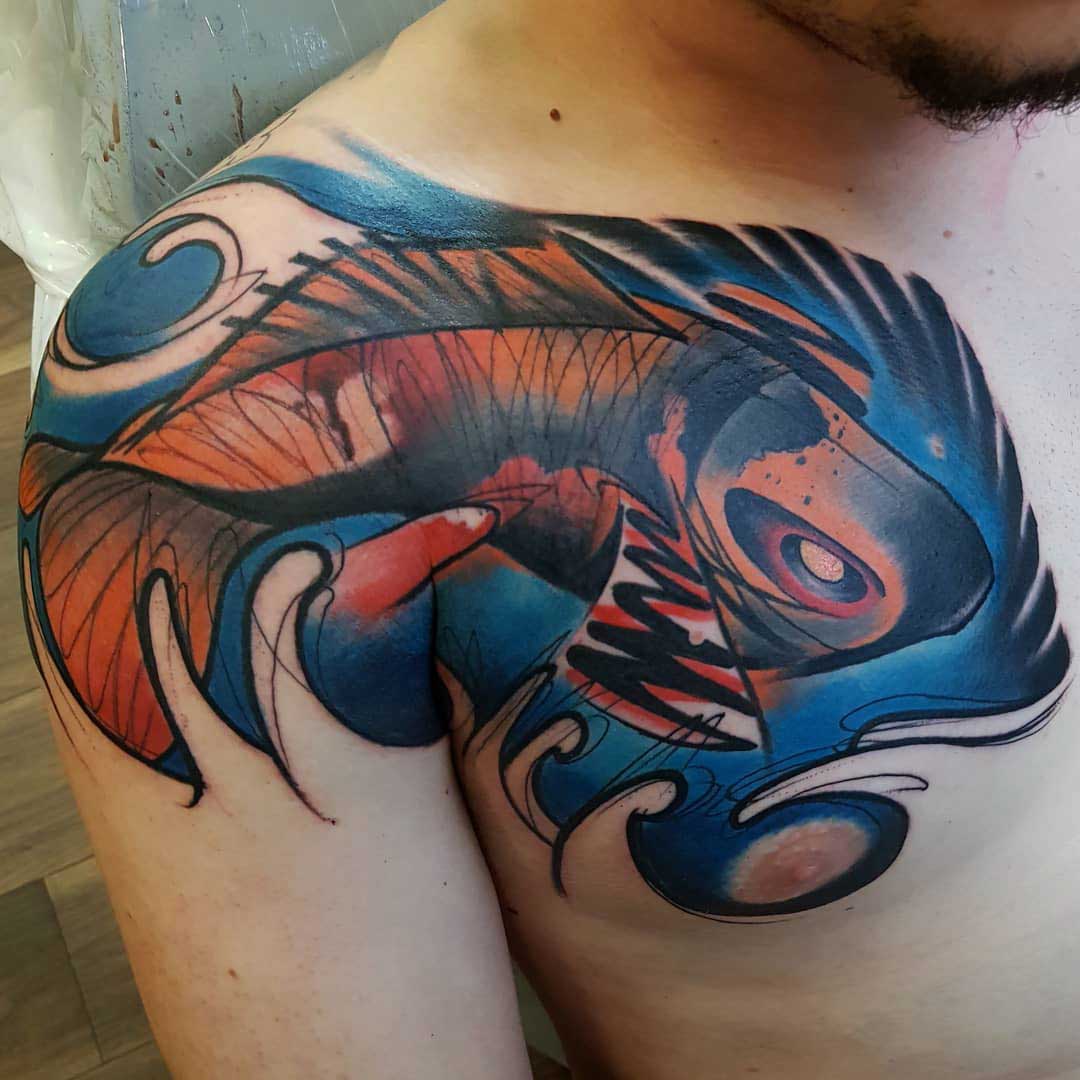 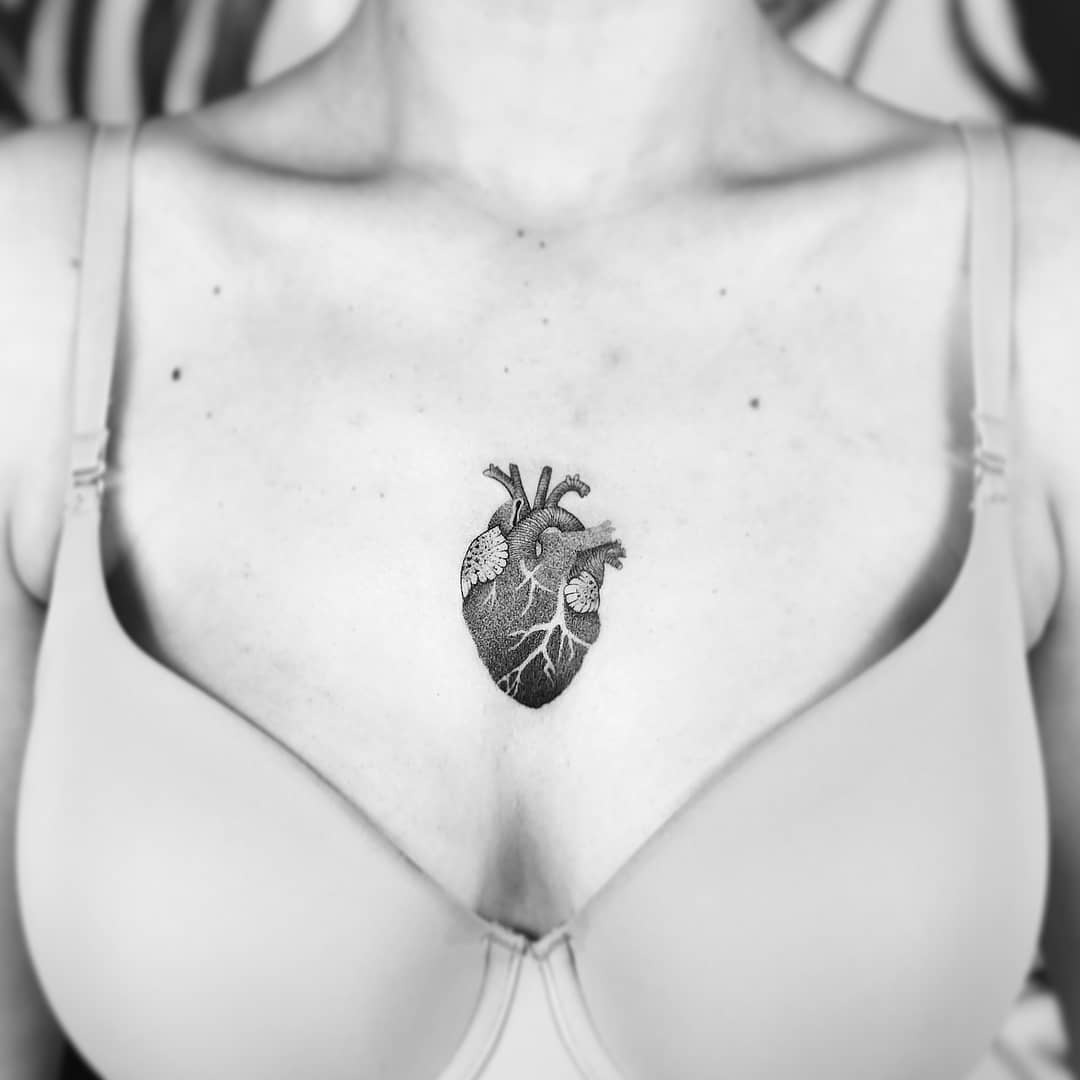